Why We Hold On, and Why We Need To Let Go 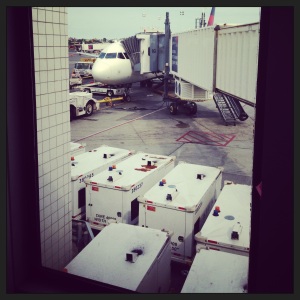 Those I am closest to know I have developed a tendency to react to stress in my life with certainty that I am at a minimum afflicted with, or at the worst, dying from, various illnesses or medical conditions (most likely one that was recently in the news because of some rare tragedy or whose awareness month we are “celebrating”).

Of course my former therapist had a fancy word to describe me and my “illnesses”: psychosomatic, or “(of a physical illness or other condition) caused or aggravated by a mental factor such as internal conflict or stress”. Yup, sounds about right.

The good news is that with experience and increased emotional awareness, I have generally learned to recognize when I am in the midst of a psychosomatic episode. I can recognize when my anxiety about something else that is going on in my life starts to manifest in physical symptoms and the corresponding fear of those physical symptoms. I can rationalize and talk myself off the ledge a solid portion of the time now, and that’s a positive thing, especially for my medical bills.

However, this past Saturday, while out in the country blissing out at my church retreat, I stepped on a bee. It was tremendously painful, and I was fortunate my husband and son were nearby and at the ready to help me remove the stinger and commandeer some ice while I collapsed into a heap on the grassy knoll I had been walking across. So much for throwing my cares to the wind and walking barefoot through the grass.

As we sat icing my foot waiting for the pain to subside, of course my reaction turned to concern about anaphylaxis. Which makes TOTAL sense (note the sarcasm), because I’ve NEVER suffered from anaphylaxis before, and no one I am blood-related to has ever suffered from anaphylaxis either. My husband was kind enough to point these facts out to me, as well as the fact that at least 10 minutes had passed since the bee stung me. I think he’s exact words were, “You’d be dead already if you experienced anaphylaxis.”

Because I couldn’t argue with his logic, I decide to pick myself up from that grassy knoll and continue on with my day.  Other than a little lingering pain, there was no visible indication I had been stung, save for the pin prick entry point. There was no swelling, and limited redness. All was good.

Then Sunday afternoon came and we started packing up to head back to the city. I noticed my foot was starting to feel a little itchy, but I pretty much ignored it because I had to focus my attention on getting home and getting unpacked so I could get my oldest son re-packed for his first SOLO trip to visit the grandparents. The itchiness increased on Monday, but I didn’t have time to worry about it. I was running around like a chicken with its head cut off getting all the last-minute accoutrements my son would need for his FIRST SOLO PLANE TRIP. When I got home Monday night from dropping my son at the airport for his FIRST SOLO PLANE TRIP, I went to bed with an uncomfortably itchy foot. Then I woke up Tuesday morning with MY SON IN ANOTHER STATE and my apartment WAY TOO QUIET and a red, really itchy foot. So I did what any rational person would do and FREAKED OUT. I convinced myself that the red irritation on the bottom of my foot that had gone virtually unnoticed for the past two days was now proof that I was somehow the first person in the history of mankind to be struck with a slow-moving, extremely delayed onset form of anaphylaxis.

I worked on being rational. I told myself you are just feeling vulnerable and have been under a lot of stress the last few days. Breathe. You are not dying. You are having a mild, totally normal reaction to a bee sting. I had some success initially. So much success I was able to get my butt to the gym for a tough workout class I had been avoiding for several weeks. In hindsight, I probably should have chosen something other than pushing myself to and beyond my physical limits, something guaranteed to make me exhausted and escort me right back into my pit of vulnerability, but I didn’t, so I ended up spending the last 15 minutes of class watching the clock and obsessing over when I could bolt for the door and hit the nearest Urgent Care clinic for professional, medical confirmation that I either was or was not on the path to death.

As I exited the gym and made my way to the Urgent Care clinic, I already knew that the visit would end with a recommendation to put some anti-itch cream on my foot and a completely unnecessary medical bill. But I needed peace of mind, and I needed it from another human being, from someone who went to school for a really long time.

When I finally saw the doctor, I had to give him credit. He looked intently at the small reddish area on the bottom of my foot. He pretended I wasn’t completely wasting his time. He explained to me all of the things I had already read on the internet about how anaphylaxis occurs and how there was no way I could suffer from anaphylaxis three days after a bee sting. He gave me a prescription for an anti-itch cream (a prescription that the pharmacist couldn’t fill because the dosage was over-the-counter grade) and told me to take a Benadryl or Claritin. He assured me I was having a completely normal, mild reaction to a bee sting.

So I started to cry.

OF COURSE I’M CRYING, YOU IDIOT! MY SON SPROUTED WINGS AND LEFT THE NEST AND I’M SO FREAKED OUT BY THAT I AM SITTING IN YOUR URGENT CARE WASTING MONEY MY HUSBAND WORKS EXTREMELY HARD FOR SO YOU CAN TELL ME I NEED TO PUT SOME ANTI-ITCH CREAM ON A BUG BITE. WOULDN’T YOU BE CRYING???

Of course I didn’t actually say that. I wanted to be able to walk out of that exam room with what little dignity I had left. So I plugged up the water works and told the doctor who appeared equal parts terrified, concerned and confused that I was FINE. Everything was FINE.

But everything wasn’t fine.

When my husband and I first started tossing around options for how we would get our oldest son to Michigan for this visit, I was not at all comfortable with the idea of letting him fly alone. I told myself it would be too much for him, I told myself he wasn’t ready, I told myself I couldn’t bear to think of him being on a plane alone on the off-chance that there was an unruly passenger or an emergency or an accident. I told myself all the worry was about him. But with him at his destination safe and sound and me still at home anxious and uncomfortable, I realized my worry and hesitation was just as much about me as it was about him, if not more so.

Children are a great distraction from the things that keep us unsettled deep down to our core. They demand our time and our energy and an inordinate amount of space in our brains and our hearts. But when they start to grow beyond us and into their own lives and worlds and hopes and dreams, that’s when shit gets scary. Because when we let them go, there’s a whole bunch of available time to get re-acquainted with ourselves, right down to the messy, dirty parts we thought we had packed away so long ago.

Parents, we want to hold on tightly and protect our kids and keep them close because WE ARE STILL TRYING TO PROTECT OURSELVES from our own baggage, our own scars and fears and hurt feelings and unrealized hopes and dreams. WE WORK SO HARD TO PREVENT OR CUSHION OUR KIDS’ FALL, SO WE CAN CUSHION OUR OWN FRAGILE SELVES. But here’s the thing. In trying so hard to provide a soft landing, we might just end up clipping their wings or handing them their own heavy load of baggage, so they grow up never knowing or trusting just how far or how high they are capable of flying.

And let me tell you, oh how they are capable of flying. When I spoke to my son at the airport shortly after landing, he sounded ecstatic. His pride and self-confidence were literally oozing through the phone. He told me he was a little scared and had a bout of “runway fever” while the plane was delayed at takeoff, but he got through it. I told him I was so proud of him, to which he responded, “Yeah, I went into the bathroom and looked in the mirror and I said to myself, ‘Kid, where are you going? You’re a grown man now.’”

As I laughed and smiled with a full and happy heart I realized that while technically he’s still just a nine-year old boy, he’s right. He took a big, huge, giant man step this week. And that was hard for me. REALLY HARD. But I wouldn’t have it any other way.