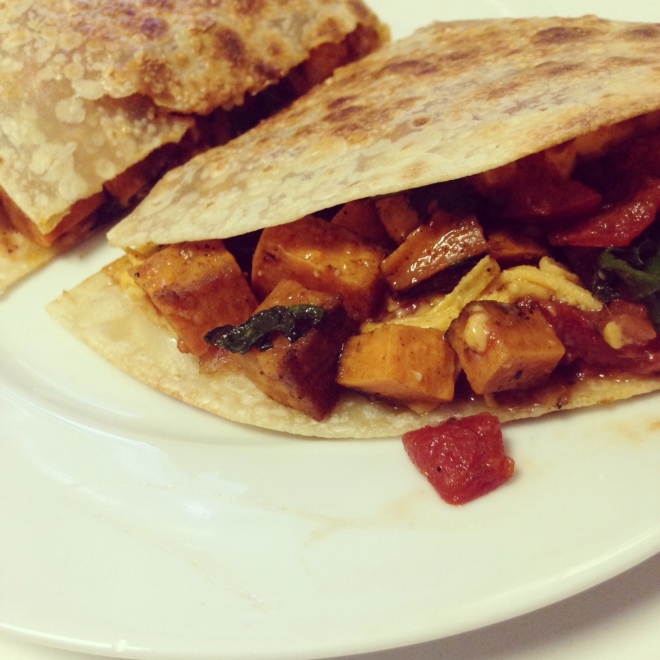 Last week I made quesadillas for dinner, but I made a horrible, horrible mistake. I didn’t make the kind my kids were expecting, you know, rice and beans and cheese. Standard. Comfortable. Familiar. I had a couple of sweet potatoes and a big box of baby kale in my fridge, and I was tired of the same old, same old. So I threw together some sweet potato and kale quesadillas. I’ve actually made these before, but my boys weren’t around for the prep process and they didn’t see what was in them. They gobbled them up that time.

As they headed back to their bedroom, I knew I had been caught red handed. When they returned 15 minutes later, I tried to play it cool. I was just finishing up assembling the first quesadilla, and they saw me scoop a giant pile of sweet potatoes and kale on top of the gooey cheese and salsa-covered tortilla. Things quickly went downhill.

“Mom, I’m going to make my own dinner tonight,” announced my oldest.

“You said I could if I didn’t like what you are making,” he countered.

Damn it, why do they always remember the empty threats you make in the heat of the moment?

“Well you haven’t even tried it yet, so how do you know you don’t like it?” I asked.

“I DON’T LIKE SWEET POTATOES AND I’M. NOT.EATING. IT.”

Emboldened by his older brother’s forceful declaration of independence, my youngest quickly followed suit. “I am not eating that. That’s disgusting. I want mine with rice and beans.” (Insert crossed arms, a pouty face, and a stomped foot here.)

“Listen, you had these before and you liked them,” I tried to reason.

When more whining and general snotty attitudes continued, I pulled out the big guns. “You are eating them. You are at least trying them, and if you don’t, you can both go straight to bed.”

With that, my youngest started sobbing. While he likes to test the boundaries of his independence and can be very stubborn, punishment ranks right up there for him with a doctor visit to get shots. Where my oldest could care less about being punished, my youngest finds it tragically, utterly, painfully, heartbreaking and ends up like putty in my hands. He knew he was finished. I had sapped all the fight out of him, so he let out one last desperate, guttural cry. “But Mom, THERE’S NO CREATIVITY IN THIS DISH. I CAN’T EAT IT!”

I simultaneously wanted to burst out laughing and crying.

No creativity my ass. The whole reason we are in this debacle is because I had to go and get creative with your quesadillas. Clearly we’ve been watching way too much Food Network.

While I didn’t have a sauce, I did have a tub of sour cream.

“Would you consider this dish more creative if I added a dollop of sour cream to your plate?” I asked.

With that, the waterworks stopped and all was right in his world again. He nodded his head yes and gave me a sheepish grin as he began picking at his plate.

One clean plate later for my youngest, and one half-eaten quesadilla later for my oldest (quite the accomplishment for the kid who pretty much won’t eat anything I make these days), and I decided the dish needed to find a more regular spot in our dinner rotation. It’s a good thing, because my youngest has asked every day since when I could make those quesadillas again. 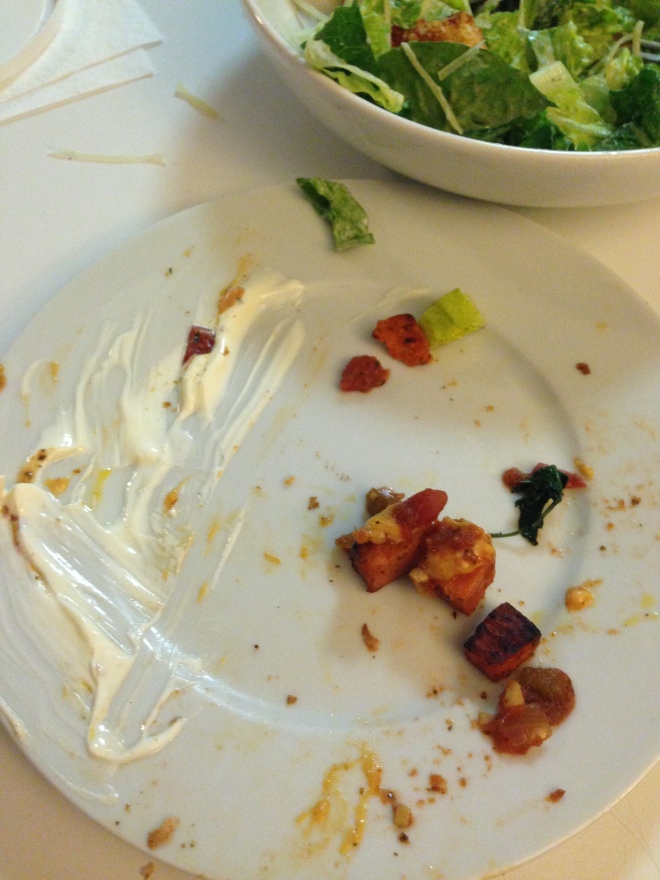 6 tortillas (I used Food for Life Brown Rice Tortillas as a gluten-free option for me and Rudi’s Whole Spelt Tortillas for the boys.)

Meanwhile, heat another skillet (preferably cast iron) over medium/medium-low heat. Spread 2-3 tablespoons salsa on a tortilla, then sprinkle 1/4 cup of cheese on top of the salsa. Place the tortilla in the skillet and cover. Check it every minute or two until the cheese is melted.

Back at the sweet potatoes, once they reach the point of being tender, stir in the baby kale. Don’t worry, it will cook down A LOT.

Scoop 1/2 – 3/4 cup of the sweet potato mixture onto one half of the tortilla, fold the other half over, cut, serve and enjoy. 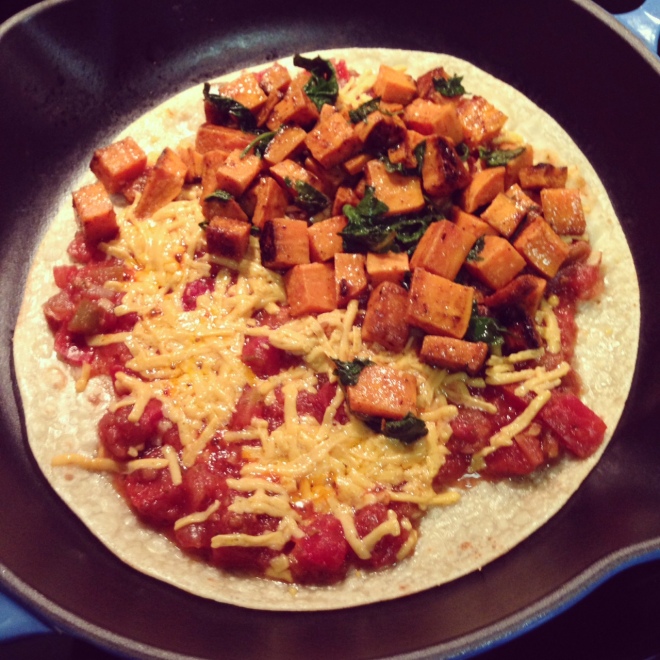 These are delicious straight up, but clearly there’s an argument to be made for adding a dollop of your favorite sour cream (either dairy or non-dairy).

20 years.
Caiden was excited that this is the last first day of school picture I will harass him to take 😝. Praying these awesome humans have an epic year. It’s a big one for both, 12th and 8th grade! We’ve got quite a few graduations on the horizon this year, God willing ❤️
We don’t get out to hike nearly as much as we would like, but when we do, it’s usually a pretty epic day. Today was no exception! Holding fast to these moments in my heart ❤️
After three days of celebrating and passing Grandpa’s Steinkamp family teen test with flying colors, it’s official…@retro_linc35 has made it to 13! Every day I am blown away by what a kind, resilient, courageous, committed, hard working, funny, creative, loving human he is. I can’t wait to see what his next 13 years brings!
Thanks for the quick visit Michigan! Until we meet again…
Yesterday was the 184th Commencement at @unionseminary, where I am studying to receive my Master’s of Divinity (MDiv). I did not graduate, I still have one more year left to finish my degree. But outside of celebrating all the amazing graduates I learned that I was selected to receive the The Hudnut Award, an award named in honor of William H. Hudnut who graduated from Union in 1890. The award is presented to a middler who has shown the greatest promise for the preaching ministry. Not everyone thinks women should be in the pulpit. I’m grateful for this institution and the diversity of voices they welcome into to the work of preaching the Good News. And I’m grateful for all the women around me (@revjeskast @rev.damaris_whittaker @revjacquilewis @jdturnernyc @mandymeis @leamatthewsbronx @its_ek @amandaaamunroe) who have had the courage and believed in their gifts and their call enough to stand in the pulpit themselves, mentoring, guiding and encouraging me through both their words and their simple presence. The best part of this award was when the teenage daughter of one of the graduates stopped to congratulate me, “It’s so cool that a woman won the preaching award!” she exclaimed. Yes. Yes it is.
“From dust we are, and to dust we shall return.”
📷: By my talented fellow seminarian @shanazdeen