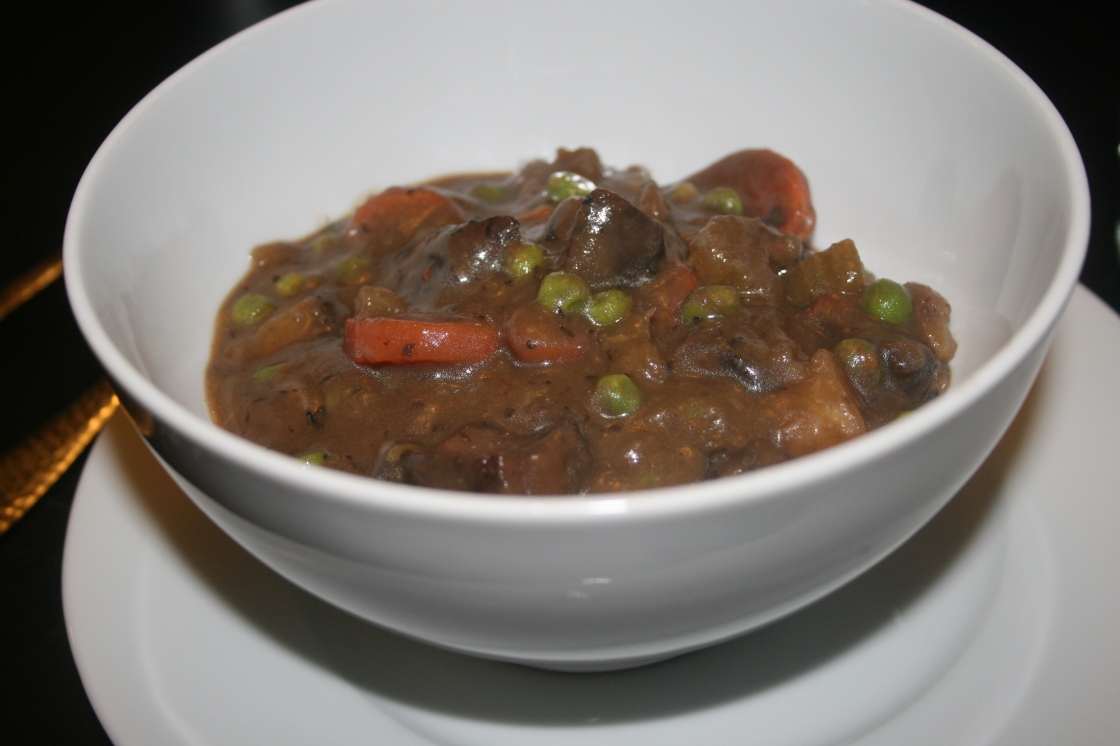 I am excited to announce the launch of Foodie Friday, a new weekly feature from TransformingMommy.  Each Friday, I will be sharing a favorite recipe.  It may be a new recipe developed by me, a reprise of a recipe transformation previously published on my now dormant food blog, or a recipe developed by someone else that was a hit with my family.  For my inaugural Foodie Friday post, I offer this throwback, originally published in February 2012.  It seemed like the perfect recipe for this cold, snowy, bone-chilling winter. (Ok, ignore the fact that it’s nearly 50 degrees and sunny today in NYC!)

I have fond memories of a stew frequently made by my mom growing up.  We always referred to it as her “brown stew”.  It was a thick and hearty beef stew, filled with carrots, potatoes, peas and celery; and it was always a winter favorite.  Paired with a crusty slice of Italian bread smeared with a pat of butter, it was stick to your bones comfort in a bowl.

I was reminded of this wonderful stew recently while talking to my sister-in-law.  She mentioned in passing that she was making mom’s “brown stew” for dinner.  Just her mention of that old favorite got the wheels turning in my head.  Could I make a stew that would replicate (or gasp!, maybe even improve upon) mom’s flavors without relying on meat?

I immediately knew that Portobello mushrooms would need to be a part of my plan of attack.  Their meaty flavor and texture would be a good replacement for the round steak called for in my mom’s recipe; but I also knew it wasn’t going to be as simple as just putting mushrooms in mom’s recipe instead of beef.  My mom’s stew derived a lot of its flavor from the slow cooking of the meat itself and the rendering of its fat and juices into the liquid and vegetables.  Her stew called for very little in the way of spices or seasoning, other than some red wine and worcestershire sauce.  Although the transformation would likely be a bit of a challenge, I felt ready to take it on.  The more time I have spent in the kitchen trying new recipes, and exploring cuisines and ingredients outside my comfort zone, the more comfortable I have becoming with developing flavors in more classic dishes.

So, a couple of days ago, when faced with one of the few dreary, rain-soaked days we have had to endure in this otherwise glorious NYC winter, I knew it was the perfect day to give the recipe for my version of “brown stew” that had been percolating in my mind a shot. 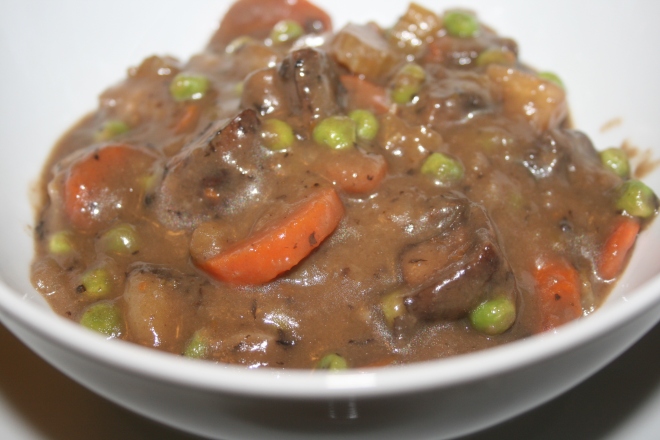 1/2 cup flour (I used gluten-free flour, but use whatever works for your dietary needs)

Directions:  Sprinkle the bottom of a large sauce pan with the coarse sea salt and allow heating for 1-2 minutes over medium heat.  Add the extra virgin olive oil and allow to heat for another minute or two.  When oil is heated, add the onions, carrots, celery, and bay leaves and sauté for 7-10 minutes until onions are translucent and veggies start to soften.

Meanwhile, prepare a dredge mix for the mushrooms by combining the flour, fresh ground black pepper, and dried thyme.  Toss the cubed mushrooms in the dredge mixture until completely coated.  Prepare a large skillet over medium heat and coat the bottom with olive oil.  Add the coated mushrooms and cook until they are browned on all sides.

Back in the saucepan, when veggies are ready, add the mushroom broth, red wine, Worcestershire sauce and potatoes.  Bring to a boil over medium/high heat for approximately 10-15 minutes.  Add the browned mushrooms to the pan and continue to cook the mixture for another 20 minutes, stirring frequently.  Lower heat; add peas and simmer until ready to serve, stirring occasionally.

Later that afternoon, as I enjoyed the aroma of my finished product simmering on the stove, I remembered I was missing the most important component, the perfect slice of dipping bread.  While we try to avoid the bread basket as much as possible in our house, this is one dish that screams for a slice (or two) to soak up the rich, gravy-like broth that surrounds the veggies.  So I called my husband and requested that he pick up a loaf of “good bread” on his way home from work, an easy task with all the great bakeries and specialty stores he encounters in Grand Central Station and beyond!  Yum!  (These days, when we need some dipping bread, I make my own gluten-free bread.  It’s much easier than I ever imagined!)